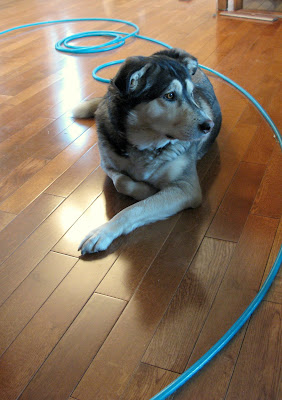 This is my girl Jenna. And she has something to show you that transpired today. And she should know. She watched the whole thing. 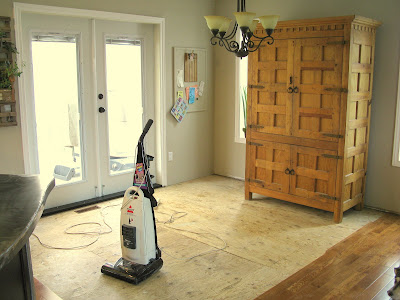 The day started with the dining room floor in plywood mode. Jenna's nose is to the far right. 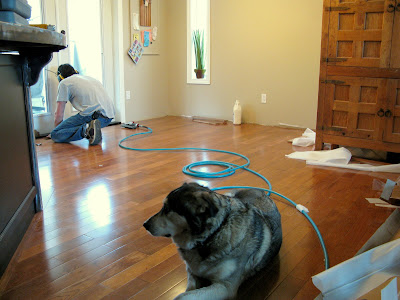 Awesome Volunteer Floor Guy Ron came today to put the finishing touches on that very room. Just... awesome! He's fast, meticulous, appreciates and drinks good coffee (but just not today) and is just a really nice guy. Ever Present Jenna thinks so too. 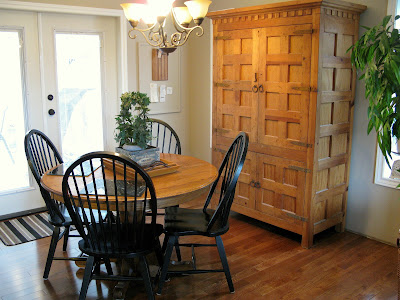 Tadaaaaa! My stuff can go back! I can eat over top a real floor now! 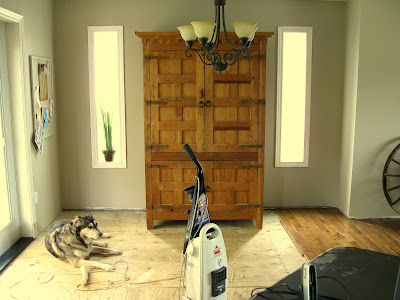 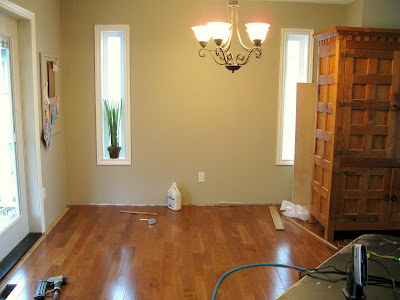 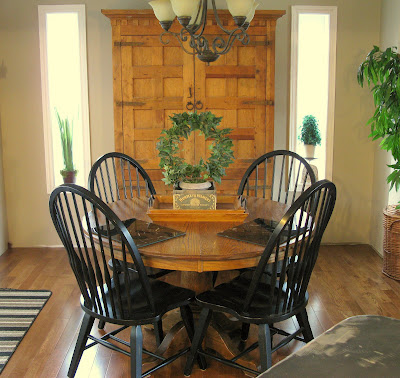 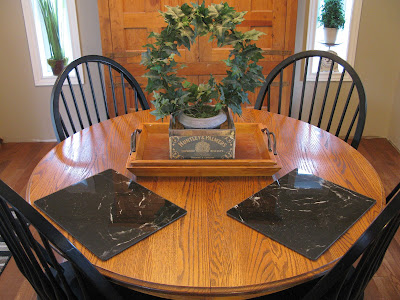 The place mats I like to use are actually glass cutting boards.

This next picture is for those of you wishing you had gorgeous hardwood floors. Folks, I worked hard for them. What you'll see next is simply a picture of reality. 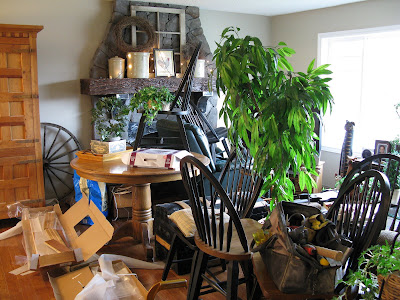 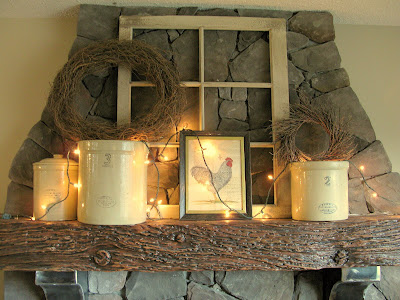 And just for fun.. today my mantle was ivory~chicken themed. The mini lights cast the most awesome candle lit glow in the evenings. Truth be told, I leave these on all day. They just bring warmth to the fireplace and room in general. 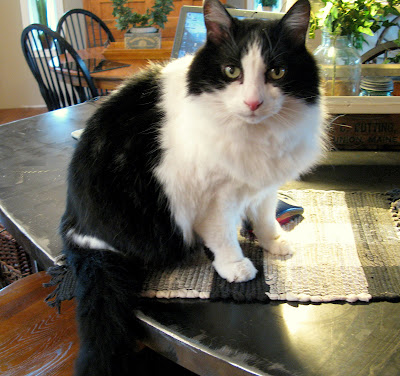 Oops. You did NOT see a cat on any kitchen island in this house. This is a figment of your imagination. Totally.
Anyway, the room has many finishing touches to come. Curtains, mouldings, area carpets, lights... The upstairs is now open floor plan and still appears abit cold without all the finishing touches in place but they will come soon! Cody's braces are first and I also need a lawn mower. Neither not so pretty but once again, just a little bit of reality.

For today, I am in love with ALL the flooring warming up this place! Thanks Ron, BIG!

Next up: I'm still working on the tile in the front entry. One day I may even finish it or something.
Posted by Funky Junk Interiors at 7:55 PM

Front entry tiling commences.. when along came some food!

I have this loyal internet follower friend named Melissa. Girl, you got your wish! I worked on my entry tile AND have pictures to prove it! Whew... she's keeping me on my toes. (I think I need her on me more than she realizes)

And I went for the gusto and did a pattern around the square partition. Everytime I do a new floor, I seem to throw in one extra curve ball to jazz things up. Getting braver or crazier, I've yet to figure out. I suppose it keeps me from feeling like I'm doing the same 'ol. I just really like designing with tile. 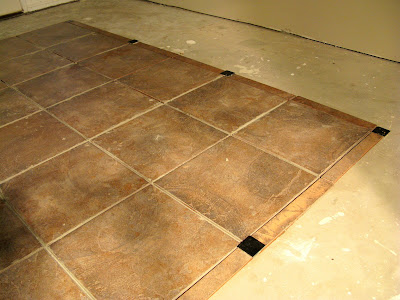 Here's a dry run of the pattern. The center squares are already mortared. The little black tiles were cut from a sheet. And I hand measured and cut the longer strips utilizing the big tiles I was already using. The tile from the ajoining laundry room is on the bias and will continue and circle around this square partition. 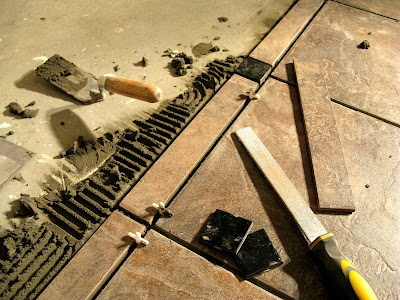 Here's a closer shot of installing that pattern. The file shown is to give the freshly cut edges a light scuff so you don't catch a sharp ridge on top of the tile with your bare feet. Because we do a lotta bare feet in this house during the summer months. 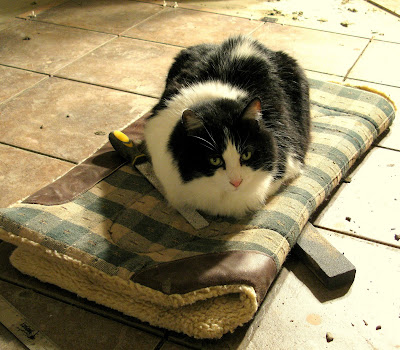 Ahhhh...my critters! It took until the end of the night to get my furry little critter company. They were either getting lonely or their food bowls were empty. I think they simply desired my company. The dog only walked through the wet mortar once, so that's not bad. Beethoven is lounging on my saddle blanket I use for my knees while tiling. 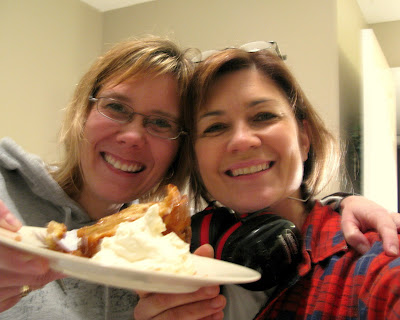 And here comes the best part. Janette paid me a short visit to see what in blazes I was up to now. We joked about how she'd rather bake and I'd rather tile and as she left, I yelled out to her to bring over something with sugar and icing on it like, anytime, ok? So she did! I squealed as I dug in. But I didn't scare her too bad because she stuck around for a quick picture, because I'm my own paparazzi as well, here at Extreme Home Renos. Anyone that steps foot on this property, beware.. it's a camera zone. And I will put your name in lights right along side me!

Because honestly, I just love to share what's happening here, and others that keep me company and help in special ways such as Janette did tonight, make a big impact on me and they deserve a little recognition too.

Renovating is hard work. But it's also extremely gratifying and fun, when you take the time to morph it into such. And yeah, Janette's visit would be fun without the cake too. But I'm soooooo glad she brought it over anyway! Thanks girlie!

And thanks Melissa, for keeping me on track here!

Next up... not sure about doing more tile for the rest of this week. It's my mom's birthday Wednesday and then Cody returns home so it may morph back into family zone for a few. But you can be pretty sure I'll be reporting (bragging) when something is being done.
Posted by Funky Junk Interiors at 11:53 PM

I sure procrastinated with this one. And I know exactly why.

I LOVE tile. I love it's workhorse functionality, it's rustic beauty and just everything about it. There's simply nothing to dislike about it!

Except for laying it I suppose. I might be tempted to slot tiling right up there alongside my joy for dapping. Tiling, when done right is outright gorgeous. But doing it right is the key. And doing it right takes time for those that don't do it everyday.

'Nuff excuses. The tiling has begun. And I'm doing something different again. I'm coming into the entryway from the laundry room on the bias, however in the center of the entryway, the tile will be squared off, so the bias tile will wrap around the squared off tile. And I might get slightly daring and do abit of a border trim around the square part.

But egads, that takes time. I know it'll so be worth the effort when I walk on it many times over during the course of every single day. It's just that it's so much more 'fun' to paint and arrange and decorate stuff, ya know?

I will persevere Tuesday again and will even throw in a picture as proof. Really. I will. I have to now because I said I would. So I will. Sigh..
Posted by Funky Junk Interiors at 12:53 AM

I've taken a short hiatus from working on the house due to my work keeping me busy. Plus, just being careful fund wise. But there's been some good about this slumping economy in a round about way.

Not being able to buy shiny new things has forced me to be creative, attempting to flip thrift store finds into wonderful new creations. And I have had some luck!

Playroom - I've been looking for a captain's bed forever. The playroom has a twin bed and I've wished for drawer storage underneath. The bed is used as a daybed for Nintendo play. And I landed one for $30 last weekend! I'm excited to get it painted up and then that room will be ready for pictures.

Kitchen - I've needed a light above the island but couldn't afford the dream lights I saw in a catalogue. So I became much more open minded and started to look for interesting eclectic things, knowing full well paint can be magical. I'm excited to report, I've found a $10 something that will get a shot of paint this weekend!

Also found was a really cool headboard for $7.50 that has a square center area. I see a bulletin board or chalkboard, or simply using the headboard as is for the back of a bench. It was just so cute and quaint and affordable to boot!

Bookshelf - my neighbour had a garage sale 2 weeks ago and I scooped up a large bookshelf. I mentally have it placed in many areas but no doubt it will land in the office downstairs. That room is also due for pics.

Once these items are placed in the desired rooms all nice and cleaned up, I'll be posting befores and afters. And next week, more ought to get done as the kids are on spring break so I'll be home too.

The stair woodwork is still nicely out gassing in the garage. And that tile entryway floor is still tiles in a box. And the woodwork is still pretty yellow where it ought to be white. I know I know... My work is never done it seems.

Hopefully I'll be hit with massive inspiration when I work on those new things to help set up the house! The weekend is fast approaching. Yipeeee!
Posted by Funky Junk Interiors at 11:15 PM

A thousand pardons to those checking in, and mostly to myself, for not doing more on the house. BUT, it's being thought of. Constantly.

On the weekend, I got some sanding and painting of the hallway woodwork done. Some of it was so yellowed so it looks just stunning now. And as much as I didn't enjoy the dapping prep, I did a pretty good job! (someone has to say it...)

Some other cool ideas are in the works too. Dan is coming up with some price efficient clever ideas for the front outside of the house to minimize the squareness of everything that screams BC Box. It's my guess that the person who designed these things just really liked geometric shapes, ya think?

In the spring, I have dreams of painting the outside of the house, hand carving some stone out of concrete to cover the brick, and rearrange some of the front yard gardening abit. Nice stuff out there, but it's getting big and, like the house shape, planted squarish. Time to get some natural curvy lines going.

This reno business is incredibly contagious. Once one thing is nice, the ugly beside it just has to go. As the rooms get completed, it sure is fun setting them up, but that takes time too, finding just the right things you desire, and the budget to do it. But that just inspires me to be more creative with what I have and what I find.

Today during my morning walk, I yet again walked past this house that had some old furniture on their veranda. I finally stopped in today and asked if they were wanting to get rid of it. Foiled again. No.. she had plans to fix it up and bring it into her house and make some unique pieces out of it. Heh.. sounds awfully familiar there, doesn't it?

So, one day at a time. I did lay out some tile (no mortar on the back btw) on the downstairs entry floor on the weekend, but that's as far as it got. Perhaps I should NOT plan to do the tile so it gets done or something. Does reverse psychology work on oneself? I'll let you know.

Another week of work and then it's playtime on the house again. And (ahem), I'm NOT doing the entry way tile this Saturday. Nope, not gonna happen...
Posted by Funky Junk Interiors at 9:51 PM

How it all began 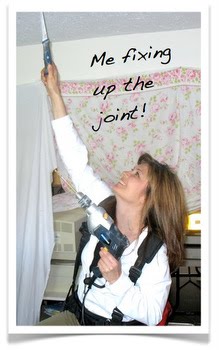 In April 2008, a local Church selected my son and I to be the fortunate recipients of a home renovation! This blog was started to document the process. Click the pic for the whole story.. it's pretty amazing!

And this is how the story continued.
Come on over and see how we decked it all out!

My other two blogs 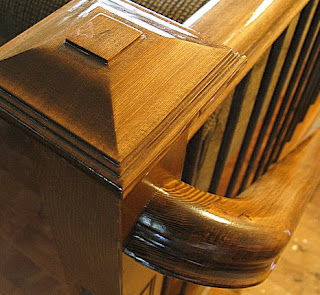 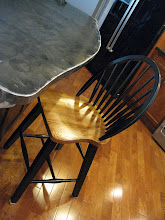 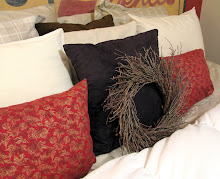 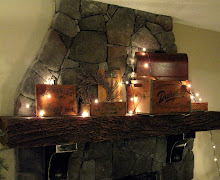